Why Your Business Needs to do Something About Security Today

These days technology is widespread. We use it abundantly in our personal as well as professional lives on a daily basis. The threat of hackers looms over us all; not only large businesses but small ones alike. This is something we can’t escape from and the threat changes on almost an hourly basis. Cyber terrorism is not something we can or should take lightly.

I recently saw an interesting graphic in a security presentation at our Enterprise Cloud Security forum.  Basically, it was a scatter graph of major security attacks since the year 2010. The change from then to now is very scary.  There are now so many attacks recorded that a scattering of major incidents across the graph in 2010 over 7 years has become a jumbled mass covering the entire graph. The year 2016 saw some of the largest cybercrime to date. We saw some pretty incredible headlines with several banks involved in security incidents and major losses around the world. The first bank robbery occurred at the Bangladesh bank and was the first known major heist of its kind. Hackers stole $81 million alone from that bank, later leading to a string of virtual bank heists at various other banking institutions around the world. 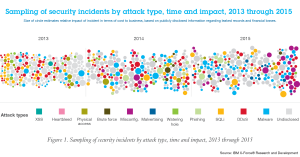 While the bank heists were major news, the most common cyber crimes we hear about are data breaches and ransomware attacks. Over the years there have been numerous breaches that have cost companies millions of dollars in total but have cost a lot more in reputation damage. Just look at Yahoo as the primary example.  As a small or medium sized business, you may feel that you are safe from such attacks faced by larger corporations and businesses like banks, governments and health care institutions. This past year is proof that no matter your size; your business needs to take Cyber Security seriously. If a small business gets hit with a cyber attack, over half of them will be out of business within 6 months especially if there is a breach of data and loss of customer trust. According to the 2017 Data Breach Investigations Report from Verizon, 61% of data breaches occurred at companies with 1,000 employees or less. This report further revealed that organizations are still relying on old systems that are out of date to perform their IT security needs. Look what’s happening right now with the WannaCry Ransomware a worldwide threat affects thousands of businesses and institutions.  Are you one of those companies running older systems, could you be vulnerable? Or do you think you have the basics covered and that it’s sufficient? You aren’t alone, most companies think that their current setup is up to par and that they have everything they need to keep them safe, but in reality, they don’t.

The technology created and used by hackers is changing daily, so it’s impossible for outdated IT security programs and firewalls to keep the hackers out. It’s sad to say its only a matter of time, its not “if” you will be hacked, its “when”. A whopping 1 in 14 people are still falling for phishing attacks and opening email attachments allowing malware to make its way through and take over their systems to leech out data or to install ransomware. It appears that the majority of small, medium and even large businesses don’t think they need policies or procedures in place to help protect themselves for when they get attacked as they simply don’t think it’s going to happen; or they think a SOC will cost them too much. If all these stats scare you, they should.

Now you are probably wondering what a SOC even is, and why your company needs one. A SOC, better known as a Security Operations Center is manned 24/7 with Security Engineers, Security Analysts and Security Managers. These centers monitor and analyze a company’s or client’s networks, endpoints, databases, applications, websites and systems. They analyze the data collected looking for suspicious activity that can be indicative of an IT security breach. They also keep their eyes peeled for potential vulnerabilities and take the necessary steps to fix them as needed. The SOC teams are equipped to detect, analyze and respond to security incidents using a strong knowledge base and set policies and procedures.

The ever changing landscape of IT threats can be overwhelming, but you don’t have to fight off the cyber villains on your own. That’s what a SOC team is there for, they can come up with the best plan of action to suit your company’s needs.  It’s not a matter of preventing cyber attacks, it’s about what to do when they do happen; because they will. You need a SOC team on your side to help protect you and stop the threat in its tracks before it becomes a larger issue. Think of a SOC as your CIA agents – here to protect you against the cybercrime that is out to steal your clients data, hold your network hostage or send a virus through to completely destroy everything you have.

Soon your clients are going to demand that you have a plan and technology in place to protect and monitor for security threats.  Government regulation is even now being developed and adopted worldwide to force companies in their supply chains to meet minimum security standards.  A good example is the UK Cyber Essentials standard that Bulletproof is working hard with Cyber NB to bring to Canada as a great starting point for SMBs to measure themselves against.  But even with a benchmark and a roadmap to improve, someone needs to be watching the store and more importantly be able to help you respond when something is happening, that is where the SOC comes in.  Bottom line is you need someone on your side watching your data and systems around the clock to ensure that there is a timely reaction to any technological breaches; and the response time and resolution is completed in a much quicker and effective fashion when experts get involved early.