Each year, Junior Achievement New Brunswick recognizes and celebrates the accomplishments of some of the province’s most prominent business leaders.

“They’re nominated for their business success first and foremost. But equally important is what they do for the communities in which they live and work…They’re great role models for what we’re trying to instill in our young people that go through JA,” said Connie Woodside, President and CEO of JANB. 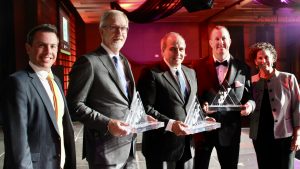 Born and raised in Fredericton, NB, Steven is the founding member of Bulletproof, a now global IT and cybersecurity company launched in 2000.  Under his leadership, the company has grown from its headquarters in Fredericton to include offices in Moncton, Saint John, Charlottetown, Halifax, Montreal, Ottawa, Toronto, Austin, Las Vegas, Fairfax, EMEA, and the UK.

In 2016, Bulletproof was acquired by the GLI Group; however, the entire leadership team at Bulletproof has continued to operate the company just as they have since inception and now employ 180 people.  Earlier this year, Bulletproof was named 2019 Partner of the Year | Modern Workplace by Microsoft Canada. 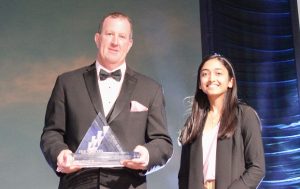 Steven has been named Atlantic Business Magazine’s Top 50 CEO’s for five consecutive years from 2008-2012 and was also named to their Top 50 CEO’s Hall of Fame in 2008 as one of its youngest members.

“You cannot buy trust, respect, or loyalty, you gain it through leading by example,” says Steven Burns. “That’s what I strive for day in and day out.  The reality is, it’s the people at our offices that deserve the recognition and it validates all their hard work.   I am deeply humbled to receive this great honor from Junior Achievement New Brunswick.”

About Bulletproof™, a GLI Company